Home / World / Wounded by sting incident on A6 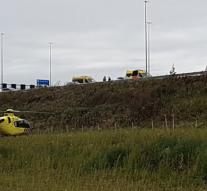 muiden - On a motorway A6 near Almere, a man was injured on Saturday afternoon by a sting incident. The police suspect that the incident occurred after a traffic jam.

The injured motorist has been taken to the hospital. The police are looking for the suspect who drove off in a Mercedes after the sting incident.