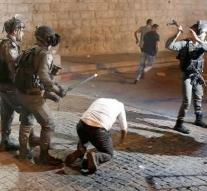 tel aviv/ramallah - In Jerusalem, it has again come to confrontation, although Israel has taken away the controversial metal detectors at the entrance to the Temple Mount. During collisions with the police, sixteen Palestinians were wounded on Tuesday evening, three of them seriously reported the Palestinian Red Half Moon Wednesday.

Like in recent days, thousands of Muslims have prayed in the streets of the old city. After the evening prayer, unrest arose and new riots and collisions with the Israeli police occurred. Several Palestinian representatives called for an escalation of protests in Ramallah on Tuesday evening.

After an assault on police officers on July 14, Israel had introduced new security measures for Islamic believers in the Islamic Enlightened Sanctuary or Temple Mount. The Palestinians protested because they saw this as an attempt by Israel to gain more control over the sanctuary.