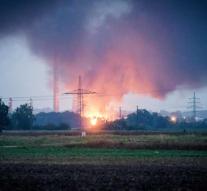 vohburg - In an explosion in an oil refinery in Bavaria (Germany), eight people were injured on Saturday morning. The blast caused a big fire.

According to local media, 1800 local residents were evacuated and temporarily housed in a sports hall. Windows and doors can be better closed according to the authorities in a radius of 20 kilometers around the refinery in Vohburg an der Donau, 65 kilometers north of Munich.