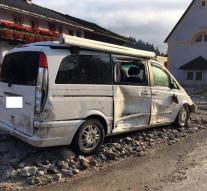 rome - Due to emergency weather in northern Italy, several people were injured. There are also thousands of people without power in the far northeastern part of the country, and trains run for hours, reports Ansa press office.

About fifty people had to be treated in the emergency department of emergency hospitals after a whirlwind had swarmed along the coast. Several people in the places Caorle, Jesolo, San Michele al Tagliamento and Portogruaro were hit by flying objects.

The emergency weather in Italy claimed several lives last weekend. The ANWB also received dozens of reports from Dutch holidaymakers who had car damage after a heavy hailstorm Wednesday evening at Lake Garda. Especially the cars had to be detached. As far as known, no Dutch were injured.