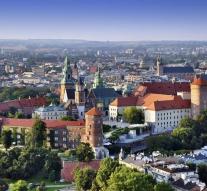 krakow - Tens of thousands of Catholics from around the world on Monday in Krakow, Poland for the start of World Youth Day. The historic center and around the main station of the city is teeming with young Catholics. During the week are expected hundreds of thousands of interested people. Pope Francis arrives later in the week.

Many people carried flags and banners of their homelands with them or were wrapped in specially made for the occasion t-shirts and hats. In total, more than half a million young Catholics have signed up for the festival, which was organized for the first time in 1985. For Tuesday scheduled a mass demonstration to all visitors to officially welcome.

The believers have few opportunities to meet the father of the church during the week. Francis will Friday visit Nazi death camp Auschwitz. On Sunday, take the Catholics again bid farewell to each other in a huge gathering in the open air, just outside Krakow.