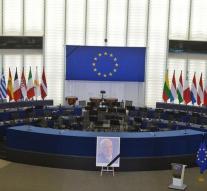 strasbourg - Numerous world leaders and other high-ranking guests prove the latest honor to Helmut Kohl in Strasbourg today. The deceased former chancellor will be the first European funeral ceremony, but not his homeland. The honorary citizen of Europe, along with his widow, preferred to have a ceremony in neighboring France.

For Helmut Kohl, who died last week at the age of 87 in his hometown of Ludwigshafen, friendship with France was of paramount importance. The historian had come to know the horrors of the Second World War as a child. Therefore, the reconciliation and friendship with France and other European countries was of great interest to the Christian Democrat.

Finally, Merkel chancellor will remind her teacher Kohl, the man who resisted the German unification in less than a year. In 1990, he convinced the Allies and the Soviets that the GDR was merged with the BRD. Half a million Soviet soldiers left peacefully East Germany.

Premier Mark Rutte will be on behalf of the Netherlands at the ceremony. The United Kingdom, after the announced Brexit, did not send a head of state or government.