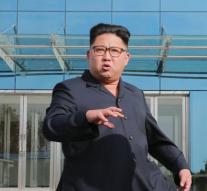 amsterdam - The election of Donald Trump for president of the United States has led to strong reactions distributed in the world. From elated to downright negative. A selection.

'A big shock,' as the German Defense Minister Ursula von der Leyen dubbed the election and questioned whether the US obligations within NATO still will fulfill.

'A wise choice', dubbed as the regime of North Korea choosing Trump.

'Working together will be difficult', as estimated the President of the EU Parliament Martin Schulz future between the US and the EU.