Home / World / Works by Da Vinci and Warhol at auction 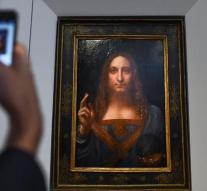 Auction house Christie estimates the value of 'Christ as Savior of the World', a small painting of Leonardo da Vinci, about 100 million. The new owner of a monumental canvas by Andy Warhol, inspired by Da Vinci's 'Last Supper' may need to count $ 50 million.

The panel of Da Vinci dates back to around 1500. Warhol made his auction for sale 'Sixty Last Suppers' in 1986, one year before his death.