Home / World / Words of anger and hope in austere ceremony 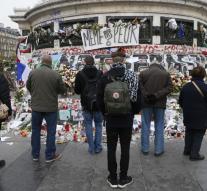 - Stern language with a clear message to terrorists. But also many words of comfort and hope, for this and future generations. "We will carry on the fight until the end and we will win. They have the death cult, we who love for life", French President Francois Hollande said two weeks after the attacks in Paris the French population with a straight face to.

The commemoration of the 130 victims Friday was sober and did not last longer than an hour. At the Dome des Invalides were next Government and other directors, representatives of the security and emergency services and those who were injured on November 13 in the shootings on the terraces of cafes and bistros and concert hall Le Bataclan. A severely wounded necessarily wanted to be and was lying in a bed in the courtyard. As the ceremony began with the song Quand on n'a que l'amour Jacques Brel. The names were then read by the people who perished in the attacks, with an indication of their age.

Hollande was the only speaker in Paris. " I assure you that they will fail. Our enemy is hatred. France will do everything the army of fanatics that this has done to destroy ", said the president, who had called on the French to hang out the national flag. That happened in many places. Not only in homes, but also in stores. Hollande called on the French people to continue his way of life. " Because they were the freedom they have been murdered. 130 names, 130 broken lives. 130 voices silenced forever. Together we reduce the pain. Music was intolerable for terrorists, and to respond, we will make our songs, multiply our concerts. "

Many victims were younger than 35 years. Hollande referred to the fall of the Berlin Wall, in 1989, the end of the Cold War. " Many victims were still a child. They were the youth of a free people. But they made it the attacks of 9/11 and later Madrid and London. They have seen terror. But will overcome this generation. We have the love for life. France will always be by your side. "