Home / World / Woolfe get off UKIP 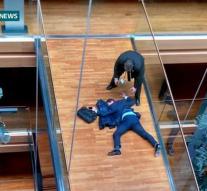 london - UKIP MEP Steven Woolfe, which two weeks ago ended up in hospital after a fight with a fellow party member, leaving the party.

Woolfe, who was in the race for the leadership of the anti-EU party, collapsed in the corridors of the European parliament in Strasbourg. An hour before, he had an argument with Comrade Mike Hookem about the future of the party. Hookem Woolfe thereby denies that he has beaten.

The party has become unmanageable since Nigel Farage has resigned as leader, Woolfe said in a statement. According to him, considerable wrangling within the party and there is a 'poisonous atmosphere'.