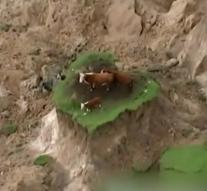 - The three cows that survived the earthquake in New Zealand in a bizarre way, have been rescued. The animals, whose remarkable helicopter images went around the world Tuesday from their plight were liberated by peasant Derrick Millton.

Rescue operation are not created images in the remote area. 'With the shovel we created a path over which the animals could come down. They kept quiet, which made it an easy job. Moreover, they were pretty thirsty, so they were eager to bottom, 'said Millton. 'They have to have are as weird look when the country began to sink them everywhere road. '

When the massive earthquake killed two people dead. The material damage was relatively speaking it. Sixty Dutch tourists were only freed Tuesday cut tourist village from one of the outside world.