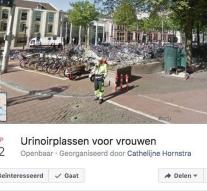 amsterdam - Hundreds of women try to urinate in the Leidseplein on a Friday evening. They say that at least on the page of a ludicrous Facebook action that was triggered after the canton court ruled in a lawsuit that women could pee in a urinal.

'I really wonder how that works. With my buttocks protruding under the edge while half-drunk Amsterdam is in the neighborhood? To sit on a splash cruise I am curious what the judge had in mind... ', So the organizer of the event writes on Facebook.

The event page is mostly overwhelmed with critical reactions to the verdict of the canton judge, who ruled that the young woman Geerte Piening still has to pay a penalty of 90 euros for game grounds. Many women find it unfair that there are free toilets for men, but not for women.

The judge stated that game areas Piening can in principle be placed on a public urinal. 'That's not nice, but it can. 'Piening reacted greatly amazed. 'I did not really think of that option. '

Urinary urination is impossible for women, most women find it. 'Ever exchanged a tampon in a urinoir?', Asks Facebook user Pauline wonderfully. 'And what about pregnancy that often has to pee?'