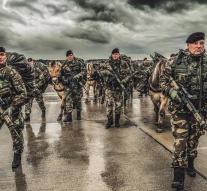 amsterdam - Women do not run hot for a job as a mariner. Half a year after the prestigious Corps of Marines opened for women, only a handful applied. This confirms a spokesman for the Ministry of Defense.

The women applied for both officers and soldiers. But no lady came through the lead-heavy inspection. Defense itself has no explanation why women do not seem to be interested in marine work. 'If we had a statement for it, it was resolved,' says a spokesman. 'It's quite male work, but there are undoubtedly women who can. '

Chief General of the Marines Frank van Kappen is not surprised that women seem to have no interest for the moment. 'I think there are only few women who are attracted to this subject, in which you become filthy and are physically busy. There will be some, but they must still be checked. '