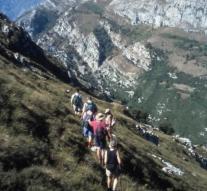 sassnitz - Two women died in Germany last weekend when they collapsed during a walk of high altitude.

A 20-year-old woman from Hamburg was stumbled on a shrub in the Jasmund National Park on the Baltic island of Rügen and fell 60 meters down. According to the police, she was daring too close to a cliff, probably taking photographs. She lost her balance and fell in depth.

At St. Bartholomä in Bavaria, a 53-year-old resident from Munich fell at a steep hill of 70 to 80 meters high in the Königssee. The woman had left the marked path presumably to take a shorter road and lost her balance in the partly snow-covered area, the police said.