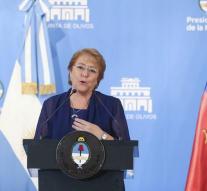 santiago - The Chilean navy has fallen into disrepute because aboard a warship female staff were spied upon by male colleagues. At least that is the suspicion at least eight people on board the frigate Admiral Lynch, according to media in the South American country.

Aboard the ship, researchers have 'complex technical systems' found on 'strategic points', the newspaper Estrella de Valparaiso wrote Thursday. The case came to light when a sailor came forward who had ingested via WhatsApp group shots of female colleagues. Apparently hung cameras in their rooms.

President Michelle Bachelet of Chile expressed its disapproval on Twitter. 'If it's true what would have happened to the frigate Lynch, then that is unacceptable. Let's eliminate all forms of violence against women 'Defense Minister Jose Antonio Gomez said that actions should be punished in a way that' sets an example. '