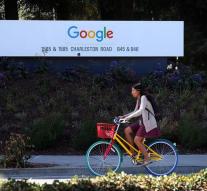 san francisco - Three former Google employees have charged their former employer for discrimination on pay and promotion. They went to court in San Francisco with their complaint.

The charge comes at a time when the Ministry of Employment wants to investigate the company on sex discrimination.

The three involved women were employed by Google as a software engineer, communications specialist and manager. They worked in Mountain View, the headquarters in California. Their complaint is simple: Google pays women less than men when they perform similar functions and appoint women to positions that lead less to promotion.

Google was founded in 1998 and employs approximately 54,000 employees.