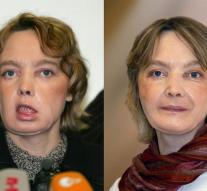 - The Frenchwoman who was the first in the world successfully underwent a face transplant is deceased at the age of 49.

Eleven years after the pioneering operation Isabelle Dinoire died in April this year. She suffered from two types of cancer. Her death, which came after a long illness, was published only on Tuesday. It was a wish of her family, Le Figaro writes.

For this she received medication for years had to make sure her body does not repelled the donated skin. Yet there was that fear, especially in her last years, actually. She could not use for a while her lip, letting doctors know. The medication she was more vulnerable to diseases like cancer.


The face of Dinoire was severely maimed after her dog had attacked her. She decided to join in 2005 the risky surgery. Of a woman who was brain dead, she received her new lips, nose and chin.

The transplant was a medical breakthrough. Dinoire regained a regular face and told how the operation had changed her life.