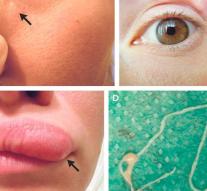 moscow - A 32-year-old woman came to the doctor with complaints. She had a moving bump in her face for weeks. First under eye, then above her eyelid and then in her lip. What turned out? It was a living parasite, which can be up to 30cm long.

The 32-year-old Russian woman got complaints for the first time when she returned from a holiday in the countryside near Moscow. A small bump appeared under her eye. Five days later the bump appeared above her eyelid and 10 days later her upper lip was jumping.

Doctors cut open her lip and pulled out a huge parasite. The worm, better known as Dirofilaria repens, is not common in humans. 'The parasite can be up to ten years old,' Dr. says. Jorgen Kurtzhals, professor at the University of Copenhagen, to CNN.

The only good way to remove the parasite is to make a small incision in the skin and then remove the worm.