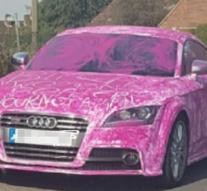 - An angry woman has spectacularly taken revenge on her apparently abusive husband by his Audi completely pink to paint and write full of invective.

The normally white Audi TT was Wednesday by several residents of the village of Flackwell Heath on Facebook posted. According to the Daily Mail she had the car not previously seen standing in the street.

The texts that lead is on the car on which the owner of the car has loose hands. Include the word 'wife beater' and epithets are chalked in the paint. There is also 'You're not a man. '


According to the newspaper, the police investigation into the matter.