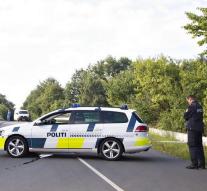 copenhagen - An unknown pitcher from a concrete block slain a woman on a Danish motorway. The bridge thrown piece of concrete struck on early Sunday morning in the south of Denmark, the car of a foreign family, police said.

The woman was killed, her husband was seriously injured, one child was only grazes on. About the origin of the family wanted the police do in Odense no announcements before the family was informed.

The accident happened on the E20 between junctions Blommenslyst and Vissenbjerg. The highway is the main link between Sweden and western Denmark or Germany.


The police began a search for the perpetrator or perpetrators. They would have thrown several heavy stones of the bridge. But not all stone hit the car. Police Sunday showed footage of two concrete blocks weighing between 9.5 and 30 kg respectively.