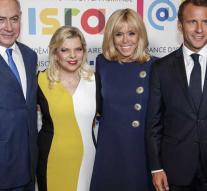 jerusalem - The wife of the Israeli Prime Minister, Sara Netanyahu, has been charged with fraud and abuse of government money. She is suspected of wrongly converting around 87,000 euros to expensive food from renowned chefs from well-known restaurants.

She had the food delivered while the rules were not allowed, because the official residence of her husband has a cook, Israeli media reported.

The catering by exquisite restaurants lasted from 2010 to 2013 according to the prosecutors. They state that Sara Netanyahu did know that she acted fraudulently. She therefore tried to pretend that his own cook was absent. She has, according to justice, refused to come to a settlement in this case. She did not want to reimburse the ordered meals and fights the accusations.

Her husband is now involved in three corruption cases.