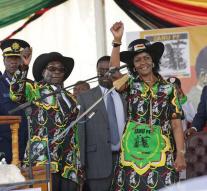 johannesburg - The Zimbabwean President Robert Mugabe's wife reported on Tuesday to the South African police. Grace Mugabe, the possible successor and second-century woman of the 93-year-old president, had abused a woman in Johannesburg last weekend.

According to the TV channel eNCA, the woman was injured on her head.

The alleged abuse took place on a Sunday night in a hotel in Sandton. There are various stories the reason why the 52-year-old first lady was in South Africa. According to a number of media, Mugabe was traveling for a business trip in the country, other media commented on a doctor's visit. She would have hurt her foot in Harare, the capital of Zimbabwe.

The authorities in South Africa are investigating the abuse.