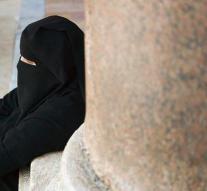 zaventem - A Danish woman in a nikab was denied access to Belgium on Wednesday because she did not show her face at a border inspection at Zaventem airport. That's what Theo Francken, State Secretary for Asylum and Migration, announced on Friday. In Belgium, it has been forbidden to wear a nikab since 2011.

'A woman with Danish nationality from Tunis (Tunisian capital, red.) Landed on a Zambian night with a nikab. She was traveling to Copenhagen, Denmark, and had to undergo our Schengen border check, 'Francken told a Facebook post.

'After refusing to see her face in Tunis, she refused this in Zaventem again. Our border police then refused access to the Schengen area. Without identity checking, no access to our territory. Today she was returned to Tunisia. People who refuse to identify can not afford access to Schengen. '