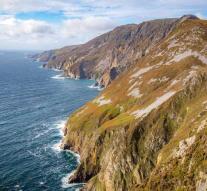 clifden - A violent storm has blown a caravan on the Irish west coast with a woman in it from a cliff. In addition, the woman who was in her fifties was killed. The \u0026 # x27; Gardaí \u0026 # x27; (police) reported that after a long search the body was found not far from the village of Claddaghduff on a beach. The caravan was difficult to reach for rescuers despite the fact that the colossus did not end up in the sea.

Ireland is plagued by a violent storm that sweeps across the island with wind speeds of up to 120 kilometers. In an estimated 55,000 buildings, the power went down on Wednesday due to the storm. Numerous flights to and from Ireland have failed, especially at the airports of Dublin, Limerick (Shannon) and Cork.