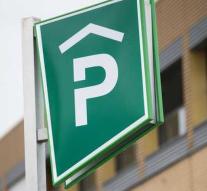 palma de mallorca - The owner of a blue Volvo that was put in a parking garage in the center of Palma de Mallorca in March 2009 still has to pay 28,000 euros in parking fees. This has been confirmed by a Spanish judge after years of proceedings on the abandoned car, reported Monday the newspaper El País.

The Volvo was removed from the parking garage last week with the help of a crane. The landlord of the parking space stepped to the court in 2012 when the car was parked there for years. If the parking ticket had been put in the payment machine at that time, the parking fee due had already gone far over 20,000 euros.

The landlord was right, but the driver did not hear anything from him. She also delayed procedures with which the landlord hoped to settle the bill. That has not happened yet, but the car is finally gone and is no longer owned by the woman who parked him there nine years ago.