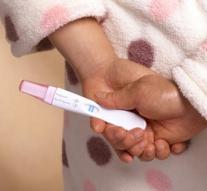 london - A 24-year-old woman gave birth in London after doctors had recovered her fertility by using an ovary was removed and frozen when she was nine years old. To our knowledge it is the first to get a child through ovarian tissue that predates the onset of puberty.

Happy mother Moaza Al Matrooshi, born in Dubai, said Wednesday the BBC of a miracle. According to the specialists who treated her, the medical a major step forward. Moaza was born with the blood disorder beta thalassemia. Before she underwent a bone marrow transplant, she received chemotherapy. Because it usually leads to infertility, doctors decided to save her right ovary and freezing.

The preserved tissue was implanted into five strips last year, its no longer functioning left ovary and a small part next to the uterus. The surgery succeeded wonderfully. The young woman who had the transition behind us, got a normal hormone levels back and went ovulate again. For the chance to increase pregnancy, some donated oocytes were fertilized 'in vitro', with a healthy son as a result.