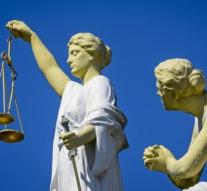 the bosch - A 39-year-old Sandra N. from Den Bosch has to appear to court on Monday morning on suspicion of murder on her partner. The 39-year-old man came to life on June 29, 2016. The sting party took place in the house of the two in the Wilgenstraat in Den Bosch.

LIVE- Reporter Saskia Belleman is present at the trial. Her tweets are read at the bottom of this article (vs. 9 o'clock)

The man was found near his mother's house living in this street. Agents encountered the deceased man, the woman was severely injured. She was hit in the heart, lungs and intestines. She was taken to a hospital. The couple was married for 20 years and has 5 children.