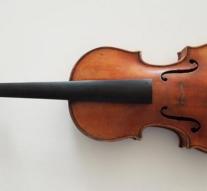 tokyo - For the destruction of her ex-husband's violin collection, a Chinese woman was arrested in Tokyo. The 34-year-old woman broke into her ex and took over 54 violins, worth over 800,000 euros. They were in a divorce at that time, according to the BBC, based on the local press office Kyodo News.

The 62-year-old former husband is known as a maker and collector of violins. His most precious cast instrument was an Italian violin worth about 380,000 euros. The incident took place in 2014, but the woman has just been arrested when she returned from China to Tokyo.