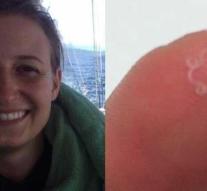 portland - Doctors have 14 eye-worms removed from an American woman. According to specialists, this is a species that has never been seen in humans before. For the first time an eyeworm of cattle would have crossed over to humans.

The 28-year-old Abby Beckley got the fright of her life when she saw a worm move over her eye. After the bizarre sensation, all the alarm bells went off immediately at the Beckley. 'I looked at it and saw the worm move. I managed to get the creature out of my eyes. After a second or five, he seemed dead. The shock was enormous! I had just pulled a worm from my eyes! My doctor told me that he had never seen anything like it. Later I took out four worms, I saw them all crawling over my eye. 'The worms would have been planned in the eye.

Beckley- a big horse lover- flew directly to Portland to be examined by specialists. 'The doctors were a little skeptical at first when the worms did not show up. After half an hour the critters showed up from under her eyelid. I will not soon forget the startled faces of the doctors. 'After the doctors had removed all the pests, Beckly was relieved home. If the bugs are removed in time, this will not damage the eye.

Eye worms are common in animals, but are rather rare in humans. According to the specialists, it was only the eleventh time that someone in the US was struck by eye worms. It is an important discovery, according to the doctors, that this is the first type of cattle that has gone over from cattle.