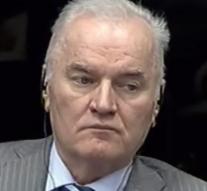 - An expert witness to testify on Thursday in the case against Ratko Mladic to the ICTY in The Hague was found dead in his hotel room, probably in the Hague. It has informed the tribunal.

It is the forensic expert Dušan Dunjić from Serbia who also has made statements in other cases as a witness. He was found dead by staff and a representative of the tribunal. His death is being investigated by the Dutch authorities, according to the tribunal.