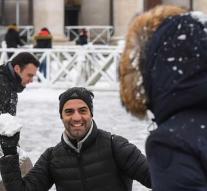 warsaw - Not only in the Netherlands do we suffer from winter temperatures. The freezing cold causes inconvenience in large parts of Europe.

In Poland, eight people have been frozen to death by the freezing cold since Friday, the Polish authorities report. During the weekend, temperatures in large parts of Poland fell to- 20 degrees Celsius. In total, 48 people have died in the country since last November.

In the north of Greece the snowfall causes nuisance on roads. According to the Greek state radio, many roads are only accessible with snow chains. On Sunday evening, numerous flights to the Greek city of Thessaloniki were canceled. That while in the south of the country, spring-like temperatures are measured.