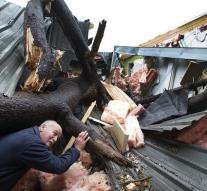 wellington - Heavy winter storms harass New Zealand. In the capital of Wellington, the aircraft remained on the ground and more than 10,000 households in the country were cut off from the power supply. The wind reached speeds of up to 160 kilometers per hour according to the New Zealand Meteorological Service.

In the Strait Cook, the strait separating the North Island and the South Island, the waves reached 11 meters high. Some major highways and rail and ferry services were interrupted. On the northern island ice and snow blocked several roads. The traffic situation is also dangerous on the South Island.

July is usually the coldest month in winter on the southern hemisphere.