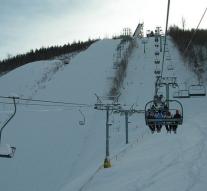 bratislava - Rescue workers on Friday in a Slovak ski center freed a hundred skiers and snowboarders in a chairlift. The skiers were about three hours stuck in an elevator, who had given up the ghost by an electronic defect. At a temperature of minus 11 degrees Celsius, they had to wait patiently until they were helped.

Rescue workers climbed into the pillars of the chairlift in the area Závažná Poruba, showed Slovak media. They insured persons passengers and left the bags down on ropes. Once on the ground the fire brigade brought the athletes to the valley.

A woman was taken to hospital with hypothermia. No one else was injured.