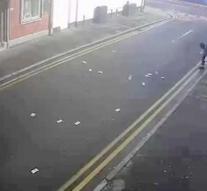 manchester - Two criminals, after a robbery in the British town of Droylsden, could not enjoy their booty for long. One of the men had crammed the stolen banknotes into his pants and then saw them blow away, the regional newspaper Manchester Evening News reports.

The police have released images of the bumbling duo, hoping to find the perpetrators. You can see how the banknotes blow from the pants of one of the men. He then makes an attempt to pick up the loot, but seems to lose more money. Meanwhile, the man has to avoid cars driving through the street.