Home / World / William: 'I just wanted to sit in my room and cry' 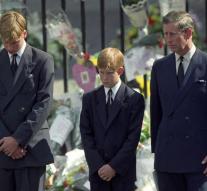 - Prince Harry and Prince William spoke openly for the first time when they were told that their mother had died in a car crash in Paris. They also talk extensively about the hard week after the shocking news and the funeral where the whole world had focused its eyes on at the time.

The brothers Harry and William open a booklet in the BBC documentary Diana, 7 Days, to be broadcast on BBC1 next Sunday. The very first moment they got the bad news was fierce. William: 'I felt dizzy and disoriented, and especially confused. I kept wondering, 'why I, what did I do wrong?'. '

The documentary by director Henry Singer (9/11: The Falling Man) shows how the princes tried to deal with the devastating grief that they had to keep hidden from the public. 'I just wanted to sit and cry in my room,' says William, when he had to wear his mother's casket during the funeral. 'I hung my head and tried to hide behind my long hair. '

Harry adds: 'It was just unreal. People wanted to hold us and embrace. I do not mind anyone, but shocking it was certain. People screamed, cried, touched us with wet hands with which they had wiped away their tattered faces. '

Despite several media expressions, the brothers are giving a great deal of respect to Father Charles. Harry: 'One of the hardest things for a parent to do is tell a child that a parent has passed away. But he really was for us, he was the one who was 'left over' and he did his best to take care of us and protect us. Of course that was difficult for him as well, he was in deep mourning. '

Queen Elizabeth, who stayed with her children in Balmoral, also praised them for her performance in the much-discussed '7 days'. 'I think it was a difficult position for our grandmother, she had to choose between the role of grandmother and queen's role. But she stayed with us. She even clog the newspaper every day so we did not have to see what the media all spread. Smartphones were not there yet. That was nice, so we had all the space and privacy to mourn. In the media, Elizabeth, however, received a lot of criticism because she stayed with us and did not make a public statement about her daughter's death. '

In retrospect, Harry and William say they found it amazing how positive about their mother was spoken by all the media and how overwhelming it was that the whole country lived so incredibly.

The documentary Diana, 7 Days, marks the death of Diana 20 years ago next Sunday. It is the third television specialist broadcast in a short time, in which Harry and William speak openly about the death of their mother. In addition, another three major documentaries have come out about Diana where the boys do not speak.