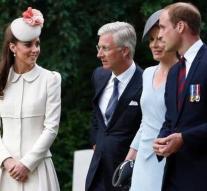 mesen - Prince William and his wife Catherine are on the 7th of June in the smallest city in Belgium. The Duke and Duchess of Cambridge commemorate in Mesen the 1917 Mine Battle. It was a milestone in the history of the First World War.

During the mining battle the German lines were subtended by the British. They installed 23 deep-mines, which were blasted on the 17th of June in the morning. This year there are many commemorations, from the British, Irish, Australians and New Zealanders. William and Catherine will follow the ceremony at the Irish Peace Monument.

Mayor Sandy Evrard looks forward to the commemoration, he tells Belga press office. 'It's going to be a very symbolic day in which we will express our gratitude and gratitude. We do not want a big show, but it must be something more than a flower shed and a Last Post. Everybody fights here, British, Irish, Catholics, Protestants,... In 1998, Queen Elizabeth came to the inauguration of the tower, now her grandson comes, which is also of symbolic value, 'said Evrard.

Prince William and Catherine were also in Belgium in 2014, when they remembered in Liege and Bergen the beginning of the First World War, then a century ago.