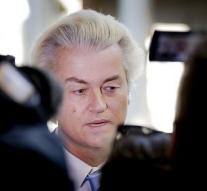 brussels/den haag - Geert Wilders does not attend the European Parliament. The Electoral Council appointed the PVV leader this week as a member of the EU Parliament, but he will thank for that, let a party spokesman know about it on Friday.

A place has been released because Vicky Maeijer recently took place in the Lower House. As a double mandate is not allowed, she had to terminate her membership of the European Parliament. Wilders is entitled to the seat because he received the most preferential votes at the European elections in 2014 as a list diver. He has thanked two times before.

As planned, The Hague councilor André Elissen, 57, a former policeman who was previously in the Lower House, will soon take the vacant position in the European PVV Group. It counts four more members. 'Congratulations to André Elissen with your seat in the European Parliament as successor to Vicky Maeijer. Give them all a lot of cotton there, 'Wilders twittered Friday.

Wilders also finds that a double mandate must be possible. However, a brief dispute that he challenged in 2014 with the European Court of Justice did not matter.