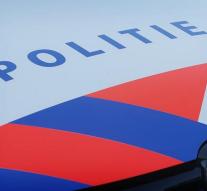 rotterdam - Four underage boys with a van crashed after a wild chase between The Hague and Rotterdam. The ride not only took care of the boys were injured, as well as havoc on the road.

The police were on the night of Thursday to Friday a report of theft of the van. After agents had seen riding gave a stop sign, but this made it just drove that bus at high speed bus in The Hague. The police drove the young, between fourteen and seventeen years, reckless and sometimes without lights by The Hague. Red lights were ignored.

Several police cars tried to intercept the bus as it drove through the A13 and the A20 towards Rotterdam, but without result. Eventually, the ride ended with a crash at the exit Crooswijk the A20.

The four boys were injured, but not seriously. Sixteen-year-old driver turned out to be the son of the owner of the van. He is being prosecuted for joyriding and reckless driving.