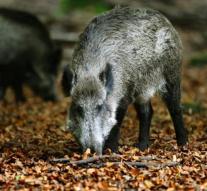 insheim - A wild boar caused three traffic accidents during the night of Saturday on Sunday in southwest Germany, causing four people to be injured.

The animal was killed near Insheim in Rhineland-Palatinate. A car came in, but also hit the carcass of the killed pig. As a result, the car was severely damaged. A third motorist arriving at this place made a maneuver in an attempt to avoid the dead swine at the last moment, but the car got out of the way. The four occupants were injured, among whom two were life-threatening.