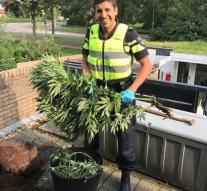 harderwijk - Alex Braakenburg, district agent in Harderwijk-South, did not say thank you that he dropped five hemp plants at a resident last week and shared this 'pride' with social media. The policeman has therefore come to the fore. 'I can imagine the indignant reactions, but do it in a worthwhile way.'

Several agents, including Braakenburg, reported last Friday at a property in Harderwijk. There on the balcony they found five hemp plants. These were visible from the road and came above the fence.

On Facebook, Braakenburg released Friday that the hemp was destroyed because 'I simply do not find a face in the middle of a residential area with children. There were five, so owner is not prosecuted for the sake of coercion policy. Childish? You may find that. The street image is given a different character by these plants, which can ultimately drain a district. '

This, however, gave the district agent a lot of criticism. 'But catch real bugs, they do not dare... Schijtbakken ', placed someone under his message. 'That soulpit can sleep well again tonight, after his MEGA drug trafficking !!', writes another. With over 6000 comments under his message on Facebook, he felt compelled to respond.

'To give even more insight into the message, we were at this house in connection with a larger survey that related to a resident of the property. The plants are destroyed in accordance with the owner of the property. He also understood that hemp plants of such a large format were not useful in the district. '

Braakenburg still wants to clarify: 'Do you realize that if you respond to a message I appreciate being fair. My colleagues from the Public Prosecution Service also read. Before you know, you are considered suspicious of a criminal offense. #fairplay. '