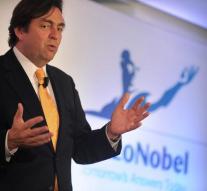 amsterdam - Hans Wijers performs for the third consecutive year, the Times Top 200 most influential Dutch to. The D66 former minister and former chief executive of Akzo Nobel holds, among other executive positions at Shell, Heineken and the Concertgebouw. In second place is Paul Polman, CEO of Unilever food company and leader in the field of sustainability.

Highest ranked woman is Marjan van Loon, CEO of Shell Netherlands. Besides Van Loon have 52 other women managed to secure a spot on the list. For the first time in years, the number decreased influential women, already they are on average higher positions than in 2015.

The aim of the Top 200 is an annual mapping the positions and networks of the 'governing elite'. The newspaper does this based on network analysis, a comprehensive database of persons and functions and a journalistic control.