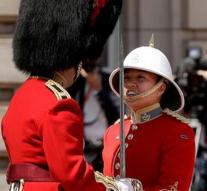 london - For the first time in history, a woman was the head of the British royal bodyguard. The 24-year-old Canadian Megan Cuoto performed the daily ceremony for the change of guard at the Buckingham Palace in London on Monday.

According to the British Ministry of Foreign Affairs, the Canadian soldier left the command for 24 hours. This is only possible because Cuoto is not British, as the British Army does not normally allow women in combat positions. Cuoto's unity acted as royal guard at the invitation of Queen Elizabeth. The Canadian soldiers are in London for the celebration of the 150th anniversary of the state of Canada.