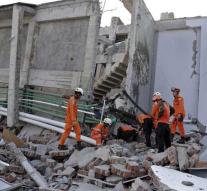 jakarta - Two days after the tsunami disaster on the Indonesian island of Sulawesi, rescue workers rescued a woman from a collapsed hotel in the city of Palu. The woman was taken off the second floor of the hotel Roa Roa on Sunday, according to rescue workers.

The seven-story building collapsed after the tidal wave. It is feared that dozens of guests are still buried in the rubble.

One of the rescuers, Retno Budiharto, told Kompas TV about the rescue: 'Luckily she was under a mattress. That's why she survived. 'According to preliminary figures, at least 832 people were killed in the disaster. There are fears that the number of deaths will increase significantly in the coming days.