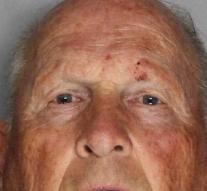 sacramento - Twelve murders, forty-five rapes. California sighed for decades under sadistic practices with bizarre details. The arrest of Joseph James DeAngelo (72) is a breakthrough in a case with many open wounds and exposed nerves.

The resident of Citrus Heights, in Sacramento County, would be the famous 'Golden State Killer'. He kept house between 1976 and 1986 with brutal rapes and murders, always carried out in a systematic manner. He wore a mask, penetrated houses, raped women, humiliated men, and drained the house.

He took money and jewels with the burglaries. His victims were between 13 and 41 years old. He fastened the man several times, and stacked crockery on his back, as described by international media. Meanwhile, he raped the woman. If he would hear the signs fall, they were both killed, he warned.

Old acquaintances start talking about DeAngelo. His former neighbor Kevin Tapia, now 36, tells how DeAngelo could be heard cursing in his garden. The presumed serial killer would also have falsely accused him of throwing things over the hedge. A fierce discussion followed between DeAngelo and Kevin's father.

'Nobody thinks that he lives next to a serial killer. At the same time I think: he was a weird guy. If you know it now, you can believe that, even if I had never conceived it myself, 'says Kevin Tapia about DeAngelo, whose house is circulating on Twitter.