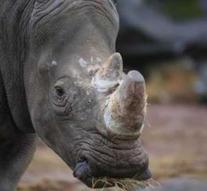 brugelette - A white rhino In the Belgian zoo Pairi Daiza is expecting a calf. Rhino Madiba, which was brought to Belgium from a South African park in 2012, gives birth to...

Besides Madiba, Pairi Daiza also has three other southern white rhinos, a subspecies of the white rhinoceros. The zoo participates in a European breeding program. Due to large-scale poaching, the survival of the species last century was in great danger. In the last ten years, more than 7100 of these animals were killed for their horn. The population was estimated at 20. 000 in 2015.