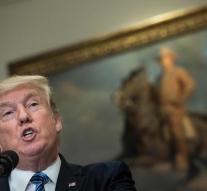 washington - The White House has said that US President Donald Trump condemned 'all forms of violence, intolerance and hatred' when he spoke about the events in Charlottesville. He also referred to 'white racists, Ku Klux Klan, neonazi and all extremist groups'.

Trump received the necessary criticism because he did not name his name in his response. A White House spokesperson attempted to reduce the damage on Sunday by emphasizing that Trump was also extremely alert. 'He called for national unity and bringing together all Americans. ''

In Charlottesville, Virginia, a motorist drove on a crowd protesting against the presence and action of right-wing extremists in the city. As a result, a dead and nineteen were injured. According to the media, the driver has been arrested. It is unclear whether he intentionally attacked the counter demonstration.

Nationalists, all-right, and neonazi gathered in Charlottesville on Friday to object to the removal of the statue of General Robert E. Lee, the military leader of the southern states in the US Civil War. The defenders of the white superiority cried out against Jews, gays and immigrants among others. On Saturday it came to violent confrontations with opponents. That resulted in another fifteen injured.\n  \n   \n    \n    \n   \n   \n   \n      \n   \n     White House Spokeswoman Sarah Huckabee Sanders.\n    \n   \n     Photo: EPA