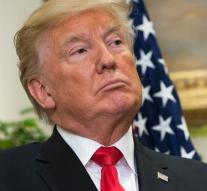 washington - President Donald Trump has initiated a major reorganization. He retrieved former campaign officials, hired lawyers to work on the Russian inquiry and, according to the Wall Street Journal, monitor his tweets by advisors in the White House. The fact that there is no job security is clear after six months.

Speaking of spokesman Sean Spicer is the latest in the series of staff exchanges. It started right after the entrance of Trump with the departure of Patrick Kennedy. According to the Washington Post, this was a genuinely State Secretary to stay on Foreign Affairs, but did not see the collaboration with Rex Tillerson. The same day, his colleagues, Joyce Anne Barr, Michele Bond and Gentry O. Smith also left the department losing a large part of its most experienced staff.

It did not stay there. An overview of the best known cases:

- Sally Yates, January 30, resigned as acting minister of justice. Trump dismissed her as she instructed the department to defend the presidential entry ban for immigrants and refugees from seven predominantly Islamic countries against the judge. The White House called that betrayal.

- Michael Flynn, 14 February fired as a national security adviser. Flynn flew after Trump had handed him over for a couple of weeks, the lane, after acquitting his knowledge of vice president Mike Pence, about the scope and content of his secret dealings with Russian officials.

- Craig Deare, fired February 17, as director of the National Security Council for the Western Round. According to Politico, Deare must clear the field after sharp criticism of Trump and Steve Bannon during a private meeting.

- Preet Bharara, March 11, fired as a federal prosecutor for the southern district of New York. Minister of Justice Jeff Sessions asked the 46 federal prosecutors still to be appointed by Obama., Bharara, a recognized corruption fighter and good at Wall Street, refused. Shortly thereafter he was forced to leave.

- James Comey, May 9, fired as FBI director. One of Trump's most surprising and controversial decisions. According to the New York Times, Trump told Russian diplomats that he had fired Comey's mafkees to get rid of Russia's pressure. The president officially announced that He was no longer able to lead the FBI.

- Michael Dubke, May 18, resigns as communications director White House, but is willing to stay until after Trump's first foreign trip. According to Politico, it is a clue that there are more changes in the guard.

- Sean Spicer, on July 21, resigns. Is it allegedly not agree with the appointment of Anthony Scaramucci as successor to Dubke.