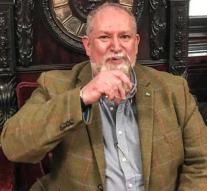 - Two thousand euros per bottle! You can not do that to a customer! Daniele Di Guiliomaria has just tasted a bit of whiskey from 1988. It is not easy for him. 'Pretty flat. Should have been bottled ten years ago. '

Di Guiliomaria is present at a whiskey tasting in Glasgow. A very special one. Wednesday is the first auction held with barrels of whiskey owned by individuals (no traders!).

One must vigorously grope in the pouch. The Macallan 1988 barrel is expected to yield 80,000 pounds.

There are about 108 bottles in the barrel. That brings the average price towards 700 pounds. Yet Di Guiliomaria, no stranger to the Scotch whiskey world, has about 2.000 euro. 'Mind you,' he explains. 'The bottles still have to be bottled. Tax has to be paid and I also have to earn some money ', continues Di Guiliomaria significant.

The auction is an initiative of the auction house Mulberry Bank Auctions from Glasgow. Whiskey expert Stewart Smith has seen an increase in interest in barrels of whiskey in recent years. 'I think the first private barrels were bought in the mid-1980s. That could then be for a few hundred pounds. In the past decade, the price has risen from about £ 600 to £ 2,000, 'Smith says. Expensive? 'Please note. The barrels must be stored for at least ten years. That is included in the price. '

Occasionally a barrel was sold during a 'normal' auction. This summer there was enough supply for a separate auction for the first time, Smith noted. 'Since we announced the auction, I have received almost constant calls from interested parties who also offer a barrel. The next auction is already around. I think I have found a new niche in the market. '

The whiskey market has exploded in recent years. The prices are rising. This applies in particular to exclusive whiskeys such as the aforementioned Macallan. Exchange exclusive bottles for hundreds of thousands of dollars from owner. A Macallan from 1926 has to deliver more than 1 million pounds at an auction in Edinburgh at the beginning of October.

This is partly due to the rapid development of the Chinese market, Smith explains. In the Trades Hall in Glasgow- a kind of guild room, a suitable environment for the tasting- a group of Chinese people is also present. They are probably crucial to the success of the auction.

Raymond Lee, active in Scotland since the mid-1980s, has played an active role in the introduction of whiskey in China. He is the distributor of, among others, Springbank and Kilchoman, a new distillery on Islay, known for its peat whiskeys. Lee buys whole barrels at various distillers. The auction is a unique opportunity to sell inaccessible whiskeys, says Lee. Which vessels have special interest, he does not want to lose. The competition is listening.

With the enormous size and deep pockets of a whole series of millionaires, China offers unprecedented opportunities. But where whiskey drinking in Scotland is mainly a men's affair- the Scottish women in the company just smell the glasses- whiskey is very popular with Chinese women. Maggie Holl has started a special club for them. With great success. The club now has 2500 members and is growing fast. 'Why not,' laughs Holl. 'It is a very distinctive drink with a very wide range of different flavors. '

The tasting itself is an experience in itself. The intended buyers are divided over tables that have been showered with proof slides. A bottom of the various whiskeys has been poured out for everyone. The glasses that follow later in the evening are covered with a glass lid, because the aroma may not evaporate.

First of all, the whiskey must be smelled badly. Flinking with the glass seems to help to develop the aromas. Preferably, a nostril is pushed deep into the glass so as not to allow any possible odor to escape.

Then the glass is held against the light. Brightness is crucial. It obviously also helps the liquid, after rocking, to reach the bottom of the glass in regular 'lines'.

Then the tasting has yet to begin. The professional tasters have an arsenal of words at their disposal to describe their experience: in the course of the evening all kinds of fruit, pineapple and herbs are detected as cinnamon or nutmeg, but also 'smoky pubs'- what is there actually attractive?- and 'tanneries'. Some whiskeys are also 'flat' or 'over their top'.

They may be professional tasters, also in this group the descriptions after various glasses become more exuberant. No wonder the more expensive whiskeys are kept until the last. For many, the Macallan is the favorite. Di Guiliomaria prefers a Highland Park 1989. 'I would like to spend an evening there', according to the Italian.

Smith looks satisfied. Given the enthusiastic response, he has every reason to think that the auction of tomorrow will be a success.