Home / World / 'Which animal would do this?' 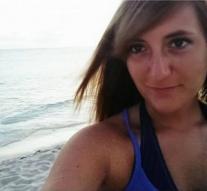 amsterdam - The 21-year-old Wendy Montulet, who was found dead in St. Maarten in the bushes, probably has become the victim of a sex murder. That fear speaks the mother of the young woman out. Wendy did not return after a jog on the Caribbean island.

The Belgian fourth in St. Maarten vacation with her parents, her sister 12 and a few friends. They would fly home at noon, but she decided a moment to go running. When she did not return, her mother hit the alarm. After an hour-long search by more than twenty officers and a helicopter, her naked body was found in the bushes, 500 meters away from their hotel.

Wendy's mother said in an interview with the Belgian news Het Laatste Nieuws fear a lust murder. Her daughter had while jogging any valuables with them. She also had several wounds on her body, according to the Attorney General on the island have been caused by 'a sharp object. '


The family of the deceased Belgian continues on St. Maarten pending autopsy. Performed this week.