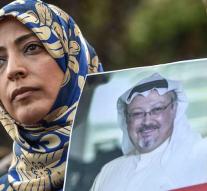 riyad - Turkey may search in the Saudi consulate in Istanbul for the missing journalist Jamal Khashoggi. So says the Saudi Crown Prince Mohammed Bin Salman, who emphasizes that his country 'has nothing to hide.'

The Saudi journalist, who is critical of the power-holders in his country, has not been seen since Tuesday. Khashoggi then went to the Saudi diplomatic post in Istanbul to request documentation. His fiancé, who has waited in vain outside the building, has expressed the fear that her partner will be held.

Prince Salman says that Khashoggi has just left the consulate. He says that the Turkish authorities are allowed to determine that themselves. 'The terrain is sovereign territory, but they are allowed to enter. They can carry out a search and do what they want, 'said the 33-year-old crown prince during an interview in a palace in Riyadh.